Integration is often vaunted as a thing to which we should all aspire. The miraculous fusion of all of our fundraising, campaigning, trading and communications efforts into a glorious whole where every message is clear and consistent and does its job effectively, at the same time as building the whole. Words like ‘synergy’ and ‘consistency’ are very prevalent. But I believe we should not think of integration as some form of nirvana, but more like a choice with upsides and downsides. Whether you do it, or don’t do it we need a better way of thinking about integration that challenges the view that it’s simply the right thing to do.

Since ‘events of 2015’ as they have become euphemistically known, when fundraising practices underwent a lot of scrutiny and regulations were firmly tightened, there’s been a lot of dialogue and self-reflection in the profession about what went wrong and why, and of course what should be done about it. Integration has been proposed as one such solution.

PROBLEM 1: LACK OF A CLEAR DEFINITION

I asked a range of people what they thought ‘integration’ meant. And here you come across the first challenge.

Which is a problem. Because if you don’t know what it is you’re talking about in the first place, if everyone has a different idea in their heads about what integration is, what is means, then you’re in for some very long, very fruitless and very frustrating meetings. Anyone? 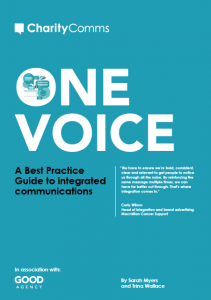 CharityComms, publishers of One Voice – a best practice guide to integrated communications, define integration as:

“The concept of making all methods of marketing – advertising, direct marketing, public relations, digital engagement etc – work in unison across all aspects of an organisation’s activities, rather than in isolation.”

But what does that mean?What does it really MEAN? (Yes I’m shouting)

Does it mean all your communications look the same? Should they all share a strapline? Should they all say the same message? Some people will say yes, others will say no. Many people just look at you with eyes like my dog has when he knows he shouldn’t have stolen the cheese. (“Please stop saying things at me” they plead.) Is it just about bringing a fundraising and campaigns into one marketing activity (like Friends of the Earth’s excellent Bee Cause campaign)?

‘Loose integrationists’ would say something like “it’s about a structure where the all the brand touchpoints build the brand and they all contribute to a consistent narrative” (marketing bullshit threat-level raised to amber, btw).

For example Concern is all about tackling hunger, WaterAid is all about clean water, and so all of their communications should be about that. They are relatively simple examples, and if you are a ‘single issue’ charity, integration is more straightforward. But if your cause is broad and multi-faceted (e.g. ending poverty, or stopping child abuse) that idea becomes more diluted.

Single-issue NGOs are in some sense automatically defaulted to integration, meaning the only real value of integration are for those NGOs that start from a position of ‘dis-integration’, that is to say those who by the nature of what they do have different messages to put out.

Let’s get back to that internal meeting about integration. We all dutifully sit down and at the beginning, someone will start out with a cosy introduction stating something along the lines of “As we know we’d all like to get better at integrating our communications, so…” and everyone happily nods along. I think there are a few things going on here: groupthink undoubtedly, desire to conform, possibly, but more than that there’s a cultural acceptance particularly prevalent among left-leaning liberal types, that we’re ‘better together’. I have no facts to back this up! However I would bet a substantial amount that most people who work for big charities would generally tend towards feelings of universalism and benevolence as opposed to ones like power and self-direction (see Schwartz circumplex.)

Whatever your political views on the EU, that cultural bias towards ‘better together’ works to distort, or even eliminate entirely, any rational debate on that issue, as well as on the smaller scale of charity comms integration. No-one will say: “Actually do you know what, I think integration is a bad thing and I’m opposed to it.” They would be ostracised by the group, and made to pay a heavy social price for such a challenging and contrary view. So the debate goes un-had.

When CharityComms first launched their One Voice report, I rather unkindly tweeted that the only numbers in it were the page numbers. But I’m afraid it’s true. There’s no ‘science bit’ in sight. No rigorous long-term longitudinal testing. No control cells. There are lots of nice words. And lots of “promising trials” and lots of opinion that integration is much better for various reasons. But no hard evidence. The advertising body the IPA set the standard for marketing effectiveness, focusing on genuine provable incrementality and isolating this as a causal effect of the campaign. Nothing I have seen even approaches the level of rigour that would be required to submit an IPA award entry for an integrated campaign.

The most effective campaigns I’ve seen at Oxfam have almost exclusively been from teams with a clear goal empowered to go and deliver. The examples that come most readily to mind are the shop ‘Tag Your Bag’ scheme – generating millions in income and providing a whole new marketing platform, The ‘85 people’ inequality stat that our campaigns team launched in 2014, which has influenced debate on a global scale and been quoted by everyone from Obama to the Pope, and is Oxfam’s most successful DRTV campaign since ‘Give a Man a Fish’. ‘Give a Man a Fish’ was born of necessity because the results of our integrated campaign were so poor that we just needed something to put on air. It didn’t have a brief and was made in less than a week.

None of them these campaigns was intended as an integrated campaign; all of them were stand-out successful moments for the teams involved. There is a long list of attempted integrated campaigns over the same time period, almost all of which resulted in failure, not because the people involved (including me!) were somehow deficient – just because it’s much, much harder to do.

These experiences and I’m sure those of others demonstrate a compelling case that those who advocate integration need to answer ­– where’s the evidence for it?

PROBLEM 4: AT WHAT COST?

There’s a proverb, variously attributed, that says ‘for every gain there is a loss’. It’s true in the physical world – as the laws of thermodynamics tell us. It’s true, in my experience, in the emotional world too. And I think it holds for integration too. When we’re talking about integrating a communications campaign, we are looking to make a gain – to try to be clearer, simpler, or more consistent. But we should also talk about the loss too. The loss, sometimes, of precision as we seek to find a unifying message, leading us inevitably to lowest common denominators. The loss of meaning that results. The loss of engagement of specific interest groups who need something more relevant and specific. When embarking on a new integrated campaign, or when sat in a meeting talking about one, I would recommend is that you ask the questions:

In my personal experience, the best performing campaigns are most likely to be locally generated, by teams that are empowered and have the right skills and understanding of what they’re trying to achieve. Most of the big disasters on the other hand come with attempts to do top-down design with big integrated campaigns, in projects with too many stakeholders to make a viable decision, too many compromises, and not enough clarity of objectives. There are many examples that people might cite as the successful case studies for integration – NSPCC ‘Full Stop’, Save The Children ‘No Child Born to Die’, for example. But again I would suggest some critical questioning here – what precisely was the form of the integration (e.g. did everything just have the same strapline?) and more importantly, how can we prove the incremental value generated by the integration itself. I think you’ll find those are much harder questions to answer. And the fact that an organisation spent marketing money successfully just means it had a successful campaign: how can we be sure that the success was down to integration specifically.

However I’m not saying integration is, per se, a bad thing. It’s a strategic choice, and one that can work well with the right leadership getting the balance of enforcement (of the key message) and allowing flexibility for teams to adapt and play with the campaign. Plus, critically, an understanding that it’s a long-term investment and should not be measured on the basis of short-term sales results.

So there we have it. Integration is a strategic choice for a campaign. It will be the right choice, sometimes. Other times it will be the wrong choice. You need to be clear, really clear, what you mean by integration. You need to have a debate, and refuse to blithely accept the integration dogma. You need to measure its effect. Properly. And you need to understand and accept the loss that integration will create. If you can do all that and still be happy that integration is right, then go right on ahead! If not, then choosing to remain dis-integrated, or to frame it more positively as ‘focused and empowered’ will probably yield you better results most of the time.

View all posts by paulvanags